Regular Expressions are ubiquitous in web applications, including Lua applications running atop OpenResty or Nginx (with OpenResty’s core components like the Lua Nginx module). OpenResty provides the ngx.re.* Lua API functions such as ngx.re.match and ngx.re.find to expose the PCRE regular expression library’s C API to the Lua land. PCRE provides a very efficient implementation of the Perl-compatible regular expressions with a Just-in-Time (JIT) compiler. PCRE is widely used by various famous systems software, including the Nginx core and the PHP runtime.

Fortunately, our OpenResty XRay product provides dynamic-tracing tools that can analyze online OpenResty and Nginx processes in real-time and quickly locate those vulnerable and slow regular expressions. No special plugins or modules are needed in the target OpenResty or Nginx applications, and absolutely no overhead would incur when OpenResty XRay is not sampling.

In this tutorial, we will demonstrate such advanced analyzers with real-world examples. In the end, we’ll also look at alternatives with fewer pathological behaviors, including RE2 and the OpenResty Regex engine.

Here we use a RedHat Enterprise Linux 7 system as an example. Any Linux distributions supported by OpenResty XRay should work equally fine, like Ubuntu, Debian, Fedora, Rocky, Alpine, etc.

We use an open-source OpenResty binary build as the target application. You can use any OpenResty or Nginx binaries, including those compiled by yourself. No special build options, plugins, or libraries are needed in your existing server installation or processes. It is the beauty of dynamic tracing technologies. It’s genuinely non-invasive.

We also have the OpenResty XRay’s Agent daemon running on the same system and have the command-line utilities from the openresty-xray-cli package installed and configured.

We have an inefficient OpenResty/Nginx Lua application that tops at 100% CPU usage in a server, as evidenced by the top command-line utility:

Note that the Nginx process’s CPU usage is 100.0%, and its PID is 3584441. We’ll reference this PID in our later dynamic-tracing analysis.

Narrowing Down the Culprit without Guessing

To analyze any C/C++ processes (including Nginx processes) having high CPU usage, we should first obtain a C-land CPU flame graph1 from the process. Although OpenResty XRay can automatically detect OpenResty/Nginx applications and sample them and generate various kinds of flame graphs, here, we will use the manual way of running command-line utilities solely for demonstration purposes.

We use the -p option to specify the target Nginx worker process’s PID. And we run the standard OpenResty XRay tool named lj-c-on-cpu. We don’t use the more generic c-on-cpu tool here because the former can automatically unwind dynamic machine code frames from LuaJIT and PCRE’s Just-in-Time (JIT) compilers.

From this C-land CPU flame graph, we can see that

Note the power of this dynamic-tracing tool of transparently unwinding JIT’d code frames without any help from the target applications2.

The next step is sampling and generating a Lua-land CPU flame graph so that we can see what is going on in the Lua code.

To generate a Lua-land CPU flame graph, we can use the standard analyzer, lj-lua-on-cpu, as in

The Lua-land flame graph also shows JIT’d Lua code, as evidenced by the trace#3:regex.lua:721 frame in the graph. That means a LuaJIT trace object of the trace ID 3, starting from the Lua code line at line 721 of the source file regex.lua. We can see that almost all the CPU time is on a single Lua code path. The most interesting Lua function frame in this dominating Lua code path is regex.lua:re_match. In that Lua file, we have

So the re_match symbol name points to the ngx.re.match API function. Then the next question becomes: what regular expression is so slow? We could directly look up the Lua source line on content_by_lua(nginx.conf:69):10, as shown in the flame graph. But if the Lua code is generic and simply matching through a Lua table holding multiple regular expressions, it is not sufficient to pinpoint the regular expression in question.

Knowing that it is the regular expression matching taking most of the CPU time, we can now use another standard analyzer named lj-slowest-ngx-re to find the slowest regular expressions matched in the current live process, as in

We open the URL in a web browser to browse the resulting bar chart shown below.

After Optimizing the Slowest Regex

We can see the shapes and characteristics of the new flame graph are very different from the previous one. The bottleneck is no longer the code paths executing Lua code. Instead, it is now the writev system call responsible for writing out the HTTP response data (as highlighted by red in the graph above). Note the ngx_http_output_filter C function frame in the graph. This function is responsible for invoking the Nginx output filter chain to send out the HTTP response header and body data.

Let’s rerun the lj-slowest-ngx-re tool against the optimized application. The resulting chart is as follows.

We can see that the maximum latency of the regular expression is much shorter, merely 58,660 nanoseconds, or about 59 microseconds.

Limiting the execution overhead of PCRE

For example, we can put the following line into the nginx.conf file.

And make sure we log any error returned by the ngx.re.match API function call:

When the match limit is exceeded, we will get the following error log message:

PCRE has almost the full support for Perl regular expressions. The flexibility comes with a cost involved with backtracking. The user may also want to consider other non-backtracking implementations of regular expressions like Google’s RE2 or OpenResty Inc’s commercial OpenResty Regex engine. These engines usually employ algorithms based on the automaton theory. Unfortunately, the average matching time of RE2 is about 50% slower than PCRE for typical regular expressions though it has few pathological cases for slow matches. The OpenResty Regex engine, on the other hand, achieves similar average performance as PCRE (sometimes even faster) and is also free of backtracking issues.

The standard Lua 5.1 language defines its own regular expression language syntax, as supported by its standard API functions string.match and string.find. OpenResty XRay also provides dynamic-tracing tools for analyzing such pattern-matching operations. We will cover this topic in another tutorial.

Let’s see an example. We first check the container name or container ID with the docker ps command.

Here the container name is angry_mclaren. We can then find out the target process’s PID in this container.

The PID for the openresty worker process is 3605692. We then run the OpenResty XRay analyzer against this PID as usual.

OpenResty XRay is also able to automatically detect long-running processes as “applications” of a particular type (like “OpenResty”, “Python”, etc.).

How The Tools are Implemented

All the tools are implemented in the Y language. OpenResty XRay executes them with either the Stap+2 or eBPF3 backends of OpenResty XRay, both of which use the 100% non-invasive dynamic tracing technologies based on the Linux kernel’s uprobes and kprobes facilities.

We don’t require any collaborations from the target applications and processes. No log data or metrics data is used or needed. We directly analyze the running processes' process space in a strictly read-only way. And we also never inject any byte-code or other executable code into the target processes. It is 100% clean and safe.

The Overhead of the Tools

The dynamic-tracing tool lj-slowest-ngx-re demonstrated in this tutorial is very efficient and suitable for online execution.

When the tools are not running and actively sampling, the overhead on the system and the target processes are strictly zero. We never inject any extra code or plugins into the target applications and processes; thus, there’s no inherent overhead.

During sampling, the request latency only increases by about 7 microseconds (us) on average on typical server hardware. And the reduction in the maximum request throughput for the fastest OpenResty/Nginx server serving tens of thousands of requests per second on each CPU core is not measurable. 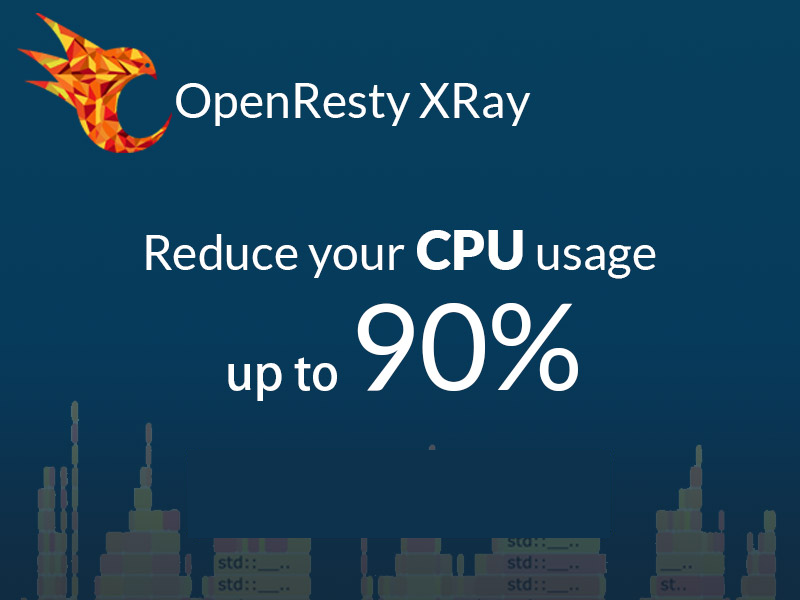